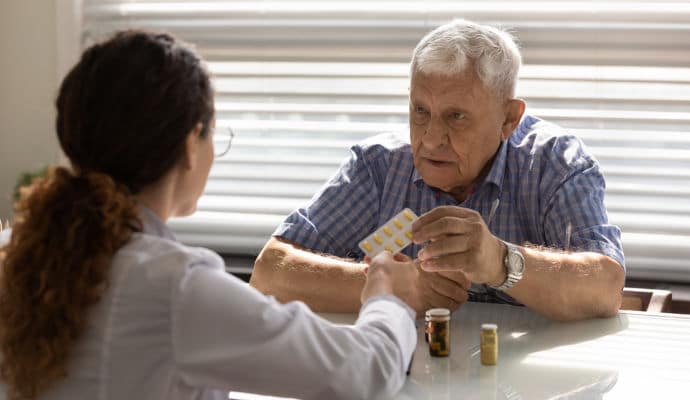 Older adults may be at increased risk for problems related to drug side effects or interactions.

That’s because older bodies process medications differently. And also because  many seniors are taking multiple drugs for multiple health conditions.

To reduce risk, the American Geriatrics Society (AGS) maintains a list of medications that are more likely to cause problems for seniors.

It’s called the AGS Beers Criteria (informally called the Beers list) and is for doctors to use as a reference when prescribing drugs to patients who are 65 or older.

For caregivers, being more informed about these medications means you’ll be able to ask better questions and be more aware of potential problems.

In 1991, Dr. Mark Beers published a paper with a list of medications that were considered to be not appropriate for people living in long-term care facilities – mostly older adults.

This is now called the AGS Beers Criteria and informally referred to as the Beers list. It’s used to help doctors improve care for older patients.

It’s been updated and reviewed by the AGS in 2019 by a panel of experts in geriatric care and pharmacotherapy.

Geriatricians (geriatric doctors) have the most experience treating older patients and are more familiar with drugs commonly used by seniors.

They’re also likely to be familiar with the Beers list and have a better idea of what medications do and don’t work well for seniors and what combinations could be problematic.

So, they may have never prescribed certain medications for conditions common in older adults.

They’re also less likely to have experience with side effects or interactions that are more common in seniors.

This lack of experience with medication effects on older bodies can be a problem if a drug side effect or interaction causes a problem for your older adult.

They might not realize that a medication could be part of the problem, not the solution.

Why would a doctor prescribe a drug that’s on the Beers list?

It’s important to remember that doctors should use the Beers list as a reference when prescribing medication for an older adult, but they shouldn’t base their decisions completely on the list.

That’s because the Beers list can’t apply to all situations or specific health conditions for each unique person.

It also doesn’t take into account the circumstances for people who are receiving palliative or hospice care.

So it’s not “wrong” for a doctor to prescribe a drug that’s on the Beers list. There may be a good reason.

Each person responds differently to medication and in some cases, the best drug for their specific situation may be one that’s on the list.

The AGS no longer makes the Beers list publicly available, but knowing that it exists can help when you speak with your older adult’s doctor.

When their doctor does a full medication review or prescribes a new medication, it’s a great opportunity to ask if any of their medications are on the Beers list.

If they are, you could ask if that’s the best option or if an alternative might be better or less risky.

You’re not trying to second guess the doctor.

Your goal is to get a better understanding of why a specific drug is needed and what the potential side effects or interactions are so you catch potential issues early.

At the end of the day, the doctor is the medical expert. But to get the best care for your older adult, it’s necessary for you to understand their health conditions and why specific treatments are right for their situation.

And as their health advocate, you have every right to ask for the information and explanations that you need.