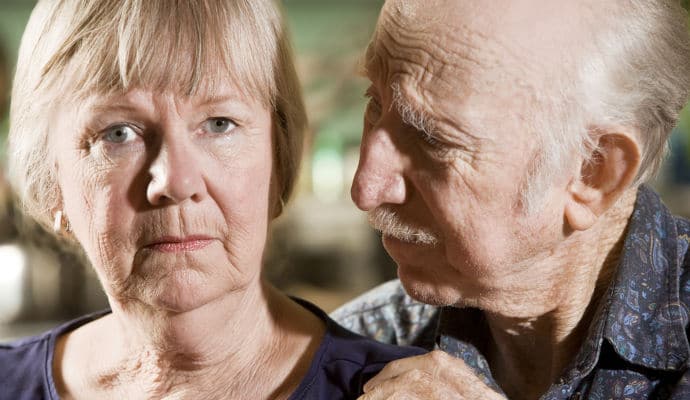 Alzheimer’s disease and other dementias cause problems with short-term memory.

This can lead to repetitive behaviors, like asking the same question or repeating the same things over and over, which can be a major source of stress for family caregivers.

Your older adult isn’t doing it on purpose to annoy you. They truly aren’t aware that they’re repeating themselves the second or twenty-third time.

But it’s challenging to respond to the repetitive questioning without eventually snapping or letting the frustration show in your voice.

That’s why it’s important to arm yourself with kind techniques that change the subject or stop the flow of questions before you get too frustrated by a constant barrage of repetitive questions.

So the next time it starts, do your best to stay calm and use these 4 tips to respond in ways that help stop the behavior.

(And if you do lose your temper, it’s because you’re human. Forgive yourself and take a short break to help you remain patient.)


Why do people with dementia repeat themselves?

A person with Alzheimer’s disease or dementia is often unsure of what’s happening, where they are, or what time or day it is. Those are pretty unsettling feelings.

And if they’re feeling uncomfortable or in pain, they may not be able to clearly express their needs.

So when your older adult is repeating the same thing over and over, they’re not necessarily asking because they want an answer.

They may be asking because they’re feeling stressed or anxious and need reassurance or to have a physical need met.

4 ways to respond to repetitive questioning in dementia

1. Respond to the emotions rather than to the words
When your older adult starts to repeat something over and over, try to guess what feelings might be causing the behavior.

For example, if you suspect they might be feeling anxious, giving a brief hug or hand squeeze while calmly responding may soothe them enough to stop their need to keep saying it.

2. Keep your answers brief
It’s tempting to answer a question from a person with Alzheimer’s disease with a common response you’d give to anybody else.

But in this case, keeping your response as short and simple as possible tends to work best.

It saves time and energy and reduces your exasperation when you have to repeat yourself seven more times.

3. Distract with an activity
Sometimes the only way to get someone with dementia to stop the repetitive questioning is to distract them with something they enjoy.

That could mean offering a snack or favorite beverage.

Or, you could ask a simple question to get them thinking about something else, like “The sun is shining today, isn’t it nice?”

Another idea is to ask them to help you with a simple task they’re still able to do, like folding laundry.

4. Escape for a few minutes
It’s tough to keep your cool and not snap at someone when you’ve heard the same thing for the twelfth time.

We’re all human and everyone’s patience wears thin, especially if this isn’t the first time it’s happened today or if it’s been going on for weeks.

Sometimes you just need to leave the room for a few minutes to get a break. Do a quick calming exercise, get a breath of fresh air, or listen to your favorite song.

When you come back, you’ll have had a little time to cool off and will be better able to handle your older adult’s repetitive behavior with greater kindness.